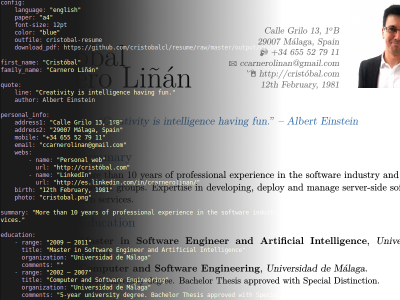 In the last week I’ve been updating my CV and finally I managed to build a nice one using the moderncv class for LaTeX. You can see it here. The problem was when someone asked me the Word version of it (don’t ask me why). As I wanted to have the curriculum vitae in this site updated too I look for a way to have my resume in multiple formats.

What was the solution? Well, maybe it’s overkill but, anyway… This is the source repository of the scripts that generate my curriculum in several formats. Firstly there is a file called resume.yaml that have all the information about my CV in YAML. Then there is a directory called templates. The templates are Mako files.

Two scripts are used to generate the files. One of them is a Python program that read the information from the YAML file and feeds the different templates to render versions of the CV in Markdown and LaTeX formats. The other one is a simple Bash script that deals with temporary directories, runs Pandoc and pdflatex. Also, it compress the final PDF file.

At this moment it generates the resume in PDF, docx, ODT and Markdown format for Hugo. In the deploy.sh script of the repository of this web I’ve added a wget command to get the last version of the CV every time the web is updated.

This system works, but it has some problems. For example, there is no easy way to add formatting in the resume, so I added a little hack: you can use <* and *> tags to emphasize. Another problem is that in Pandoc’s Markdown you can not specify image size or alignment.

So that’s it. You can fork it and write your own curriculum in the resume.yaml. Also you can add more templates. A HTML template would be very easy to do, for example, but also you can use Pandoc to generate it from the Markdown version. Something I’ve been considering is a way to export or import the LinkeId information using its API… Another possibility is to translate automatically to several languages. I leave this to you ;)